Front page About us History 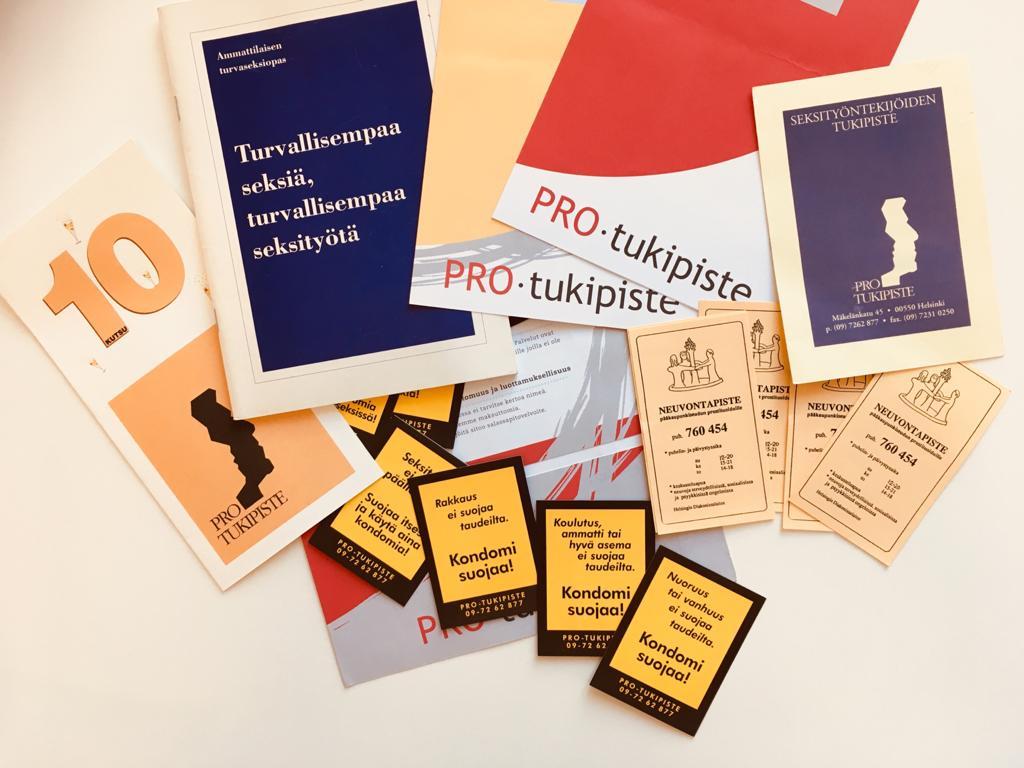 The story of Pro-tukipiste began more than 30 years ago. In the late 1980s, Finland was in a situation where we, too, were finally ready to repeal the Vagrancy Act, which was an outdated custody act punishing people for being socially disadvantaged. The police were not in favour of repealing the Act, and a threatening outlook was painted in public whereby large-scale street prostitution would also spread in Finland if prostitution as a criterion of vagrancy were removed. Other Nordic countries had municipal services specializing in prostitution and they worked primarily with drug using women who worked in street prostitution environments. Such work was considered unnecessary in Finland, because there was no visible street prostitution here.

However, a small group of people interested in the topic started to consider whether there would still be a need for support services in Finland as well. Although there was no street prostitution, there were many ads in newspapers selling or buying sex (offering and looking for company for daytime coffee was commonly known code for paid sex at the time).

Following various reports and network meetings, it became apparent that a service based on municipal services would not be set up. The most sensible thing to do would be to test the need for such work through the third sector. However, this was not a complete success either, and finally the Helsinki Deaconess Institute agreed to include a one-year trial in its social work projects. This was how work started in Helsinki in 1990 as an on-call phone service where people with training in social services and health care worked as volunteers answering the phone. We named the service “Prostituoitujen neuvontapiste” (Advisory Centre for Prostitutes).  At the time, sex work as a concept was unknown. The phone line was opened in January 1990 and the first calls came in March. By the end of the year, the number of contacts had increased so much that it was decided the work would continue after the trial year. When thinking about the name, we had assumed that all the callers would be women, so the gender was not explicitly mentioned in the name. This was a lucky “mistake”, because unlike other Nordic countries, we also received calls from men and transgender people.

It did not take long before we received feedback from the callers saying that we did not seem know very much about the industry or the everyday life of people who sell sex. We humbly admitted this and decided to build our service on dialogue where the people themselves are experts in their life while we know about the services for them. These areas of expertise were joined together, and the cooperation gave rise to customized, high-quality, effective counselling and support services. This dialogue also led us to change our name: in 1993, the advisory centre became Pro-tukipiste (Pro Support Centre).  The “Pro” prefix has three meanings: 1) ‘pro’ as in the sense of promoting something, in this case rights, 2) ‘pro’ is also an abbreviation of the word prostitution, and 3) ‘pro’ meaning that the services we provide are professional. The rest of the name, “tukipiste” (Support Centre) is a portrayal of the times, because back then the term was commonly used.

The year 1996 was a significant year of change: According to a jointly prepared plan, Pro-tukipiste separated from the Helsinki Deaconess Institute and was set up as an independent association, Pro-tukipiste ry. In the same year, outreach work was introduced as a new form of work under the guidance of the TAMPEP network, regular on-call doctor’s services began and the first peer groups started to meet as well.

Since then, our work has become even more diverse and spread across several locations. When we started, we had a hired staff of 0.5 and now there are more than twenty of us. The service centre in Tampere was opened in 2007 and the anti-trafficking work of Pro-tukipiste also began in the same year. Turku joined our network in 2016.

Pro-tukipiste has adapted to the changes in its operating environment and we have always gone wherever our target groups are. Digital services have been introduced with an open mind. Pro-tukipiste has built both national and international networks. Cross-border cooperation is important: Nordic cooperation began in 1991, cooperation with the neighbouring regions in 1995, European networking in 1995 and global networking before the turn of the millennium.

Although much has changed over the years, the basic values and underlying principles of Pro-tukipiste have remained unchanged. Respecting personal autonomy, joint action, a respectful approach and the transparency of operations without hidden agendas were our cornerstones back in 1990 and they continue to be present in our day-to-day work.